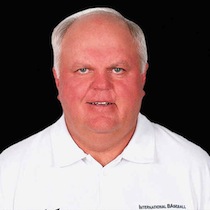 Runchey has umpired at most every level imaginable in his career of over 40 years. A well-known and respected NCAA umpire by the time he retired in 1998, Runchey’s highlights include working in the minor leagues, 48 games at the College World Series (including 4 championship games behind the plate), the 1987 Pan American Games, the 1988 World Cup, the 1992 Barcelona Olympic Games and a MLB fill-in umpire in 1979.

Runchey is very familiar with umpiring in Europe and served as the IBAF Director of Umpires between 2003 and 2009. He most recently worked with the 4 European umpires who worked the World Baseball Classic Qualifiers in Florida, Germany and Taiwan. Dick continues to train and develop umpires at the MLB Umpire Camps in southern California and the Jim Evans European Classic.

“Having Runchey available to assist is a big plus for the ABUA-E.”, said ABUA-E President Tony Jones. “His knowledge and experience of baseball at an international level is invaluable and I look forward to getting his input on how we can improve umpiring across Europe.”